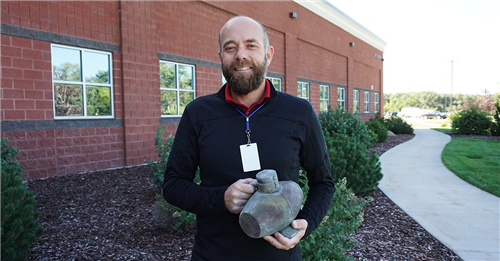 Dave Christopherson, affectionately known as Mr. C. by his students, spent most of his teaching career building the Ridgeline High School Ceramics Program into what it is today. When he first started at Ridgeline, Mr. C. had to teach other art classes because there weren’t enough students enrolled in ceramics. However, through his passion, determination, and genuine love for his students, he created a program that serves about 560 students each year. Because of his impact on Ridgeline students, he has been named the 2022-23 Cache County School District Teacher of the Year.

Teaching was not something Christopherson ever planned on doing. When taking his first ceramics class as a student at Mountain Crest High School, he wasn’t excited about it or even very good at it. Because of that, he never planned to take another one. However, during his senior year, he needed to take an extra class to graduate, and ceramics was the only class available. “For some reason, it just kind of clicked for me at that time. I found myself excelling at a rapid pace in that program, and I really fell in love with it. But I then took a very roundabout way of coming back to do it,” Christopherson explained. 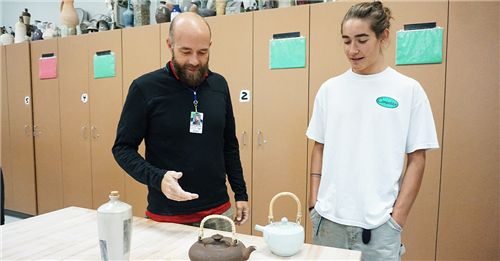 Although his teaching journey differed from many educators, Christopherson significantly impacts many students who walk into his classroom. Most of his students sign up for ceramics because they need an art credit or because their friends recommend it. But when students enter his classroom, they leave with new skills and new friends. For some students, Christopherson’s class helps them discover a passion, talent, or even a future career. “I needed an art credit, so I signed up for ceramics. I came in, and Mr. C. was super cool and welcoming,” explained Seth, a junior at Ridgeline. “He loves to teach everyone how to make stuff that they like, and he's really open to letting you go off on a project and make what you want. And that's helped me become the artist I want to be.”

Christopherson strives to create a supportive, inclusive atmosphere in his studio. He gives his students the freedom to explore and become their own artist. “We’ve tried to build excitement and a love of learning in this studio. That’s what we really go for,” said Christopherson. He encourages students to work on projects together, learn from each other, and try new things. “Without this, our program wouldn't be able to excel and achieve the goals that we set for ourselves, which are pretty lofty,” explained Christopherson. “Every year, we have goals to exhibit nationally. Every year, we try to go after some of these big scholarship opportunities. We really like to think of ourselves as being a very top-tier ceramics program.” 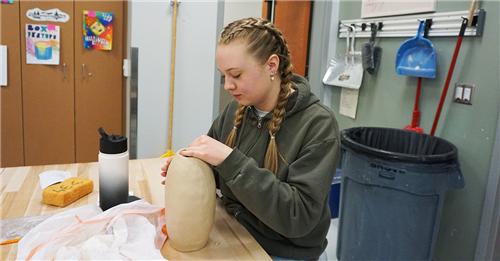 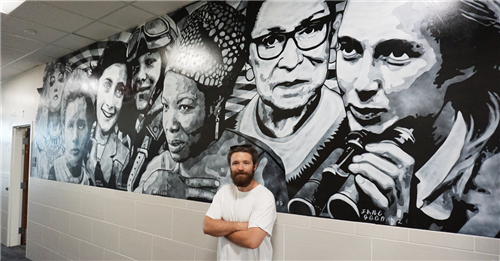 Christopherson recognizes the importance of the ceramics program in the lives of his students. “Ceramics filled a void in my life and provided a lot of healing for myself. And I see that happen with my students all the time too,” Christopherson explained with emotion in his voice. Christopherson tries to ensure that each student who walks into the studio can feel that love and support from him. “He cares about the students in here. He really shows you that he's here to help you out and let you achieve your goals,“ said Austin, a Ridgeline senior. “That goes a far way when you're struggling and feel like you're not achieving what you want to be. He always makes you just feel like you're doing good.”

Although the art of ceramics is important to Christopherson, he wants to teach his students much more. So, in everything he does, he encourages them and lets them know they will always have someone supporting them. “The biggest thing that I want my students to walk out of here knowing is that they're capable. They're capable in so many aspects and facets of their life that they don't even realize. And one of the best things that we can all do for ourselves is to find something that we're passionate about,” Christopherson said.

“Dave exemplifies hard work, dedication, collaboration, and expertise in how he teaches his students. He is a professional educator of the highest caliber, and we are fortunate to have him represent the Cache County School District in this capacity,” said Kirk McRae, CCSD Human Resource Director.

Dave Christopherson was formally recognized at the September 15, 2022 school board meeting.