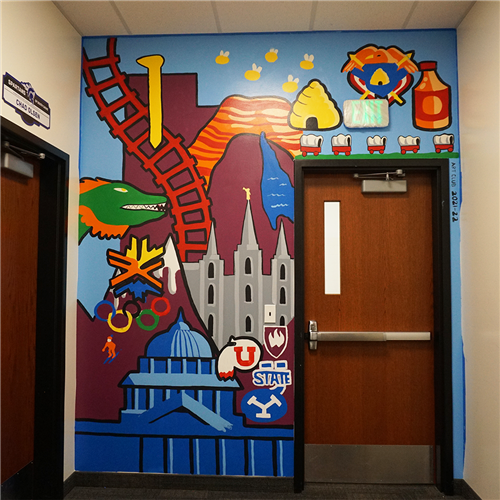 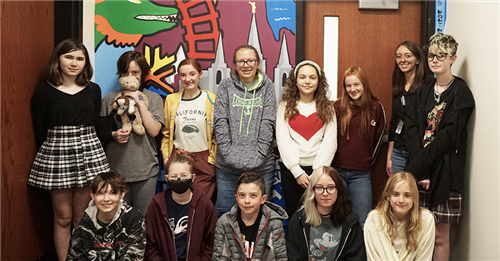 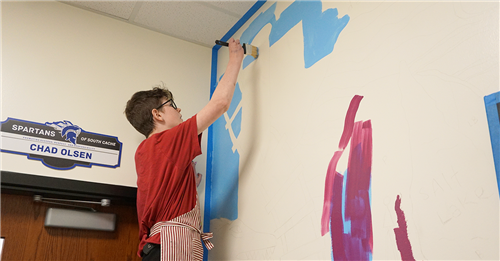 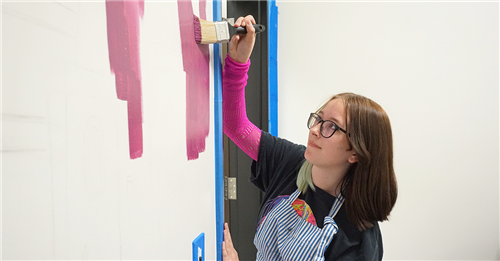 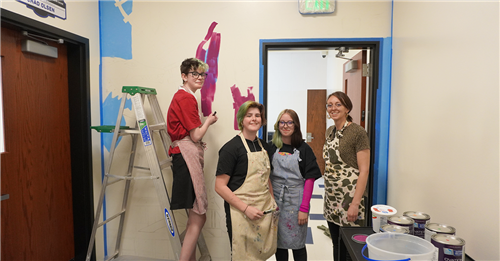 After months of planning, sketching, and painting, the South Cache Middle School Art Club recently finished a mural representing the history of Utah. The club, led by South Cache art teacher Sami Basset, started the project when the school’s history teachers approached Basset with the idea of creating a mural in the hallway between their classrooms. Taking on a project more significant than anything they’ve ever done, the club’s 15 members pushed themselves to think outside the box and use their talents in a new way. They wanted to create something that would have an impact on their school.

Ella, a member of the art club, has been working on the Utah history section of the mural since they started the project. “We, as an entire group, would just kind of give out ideas, and we wrote a list,” Ella explained. “Then, we started sketching plans to see where things could fit.” The mural includes significant Utah landmarks and icons, such as the Golden Spike and a railroad track, the capitol building, a beehive, a mountain range, pioneer wagons, a red-hued sandstone arch, and other things that the students felt were an essential part of our state’s history.

According to Bassett, the art club students led every aspect of the project. She supervised and helped when necessary, but mostly encouraged her students to work together. Determined to finish before the end of the school year, members of the club used lunch and other extra time to add the finishing touches to the mural.

Of the impact of the project on students, Bassett said, "I think this project matters for students because it encompasses everything about what it means to be an artist, but they also learned major life skills. We were lucky enough to receive this mural commission from the History teachers, so the Art Club students had a chance to work with a 'client' and figure out what they expected of the mural and how the students were going to problem-solve within their needs. They worked collaboratively (kindly and graciously, I might add!) and overcame obstacles and setbacks along the way. They got to experience the planning process, but also see the project through to the end." She added, "All of these learning experiences are necessary for helping them develop life skills- not just art skills! They did amazing work and were very patient throughout the process. I know they learned a lot, but I hope they came away knowing that with a good plan they can do anything they set their mind to in the future."

Starting next school year, the club hopes to expand the mural to other walls and to include other aspects of history, with the intention of making a difference in the school and—literally—leaving their mark.