Classified Employees of the Year

We're excited to announce our Classified Employees of the Year! They are Nate Henrie as our Paraprofessional of the Year; Kim Zilles as our Transportation Employee of the Year; Wendy Balls as our Secretary of the Year; Julene Olsen as our Food Service Employee of the Year; and Dorinda May as our Head Custodian of the Year. Congratulations to these outstanding employees. We are so grateful for their dedication and contribution to our schools, students, and staff!

Nate Henrie - Paraprofessional of the Year

Nate Henrie, a paraprofessional at North Cache Middle School, strives to help his students succeed in more than just academics. Henrie runs a lot of programs, including the after-school program, the Academic Mentorship Program, and a class called Learning Strategies. He believes that focusing on improving students’ emotions and social and physical well-being will make it easier for them to succeed.

In his four years at North Cache, Henrie has seen a lot of improvement in his students and the programs. Henrie believes in his students and wants to help them understand that they can accomplish anything they want to. “We’re just trying to teach them they can do it,” Henrie expressed. “We just have to get them to understand they can.” North Cache principal John Anderson has witnessed Henrie's impact at North Cache as Henrie has helped many students find their voice and learn how to manage school. “Every school needs a Nate Henrie,” Anderson explained. “He’s a great mentor to all of the kids in the school.” 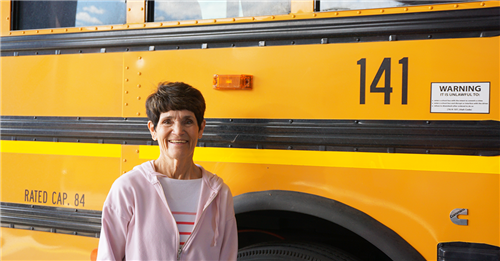 Kim Zilles started driving school busses for the Cache County School District in 1982 when her brother, who was a driver, asked her to sub for him. Now, 40 years later, Zilles is still with our school district. She started her career off by subbing for drivers while attending school at Utah State University. After starting a family, she decided that this was her path in life. Zilles has been driving bus full time for 26 years and has been a trainer, evaluator, and safety coach for the last ten years. “The kids become your kids,” Zilles reflected. “When I look at the kids, I think, ‘They’re somebody’s kids and somebody’s grandkids.’”

Wayne Reese, CCSD Transportation Administrator, is grateful for Zilles' contribution to the district. “She is truly large in character, compassion, kindness, and professionalism,” Wayne said. “Many of our bus drivers have been trained by Kim; she’s the reason they’re safe.” Zilles was planning on retiring last winter but saw the district's need for more bus drivers and trainers and immediately stepped up to the plate by pushing her retirement back. She will be retiring this year, on June 2nd, and is excited to spend her newfound free time developing hobbies like quilting and traveling with her husband. However, the thing she is most excited about is spending time with her grandchildren. 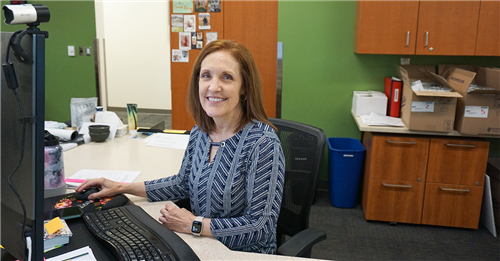 Wendy Balls - Secretary of the Year

Wendy Balls loves the energy and joy that students bring to her life. That is one of her favorite parts of her job as a Green Canyon High School secretary. “I enjoy their enthusiasm for life, and it’s fun to be around them as they are with their friends,” Balls explained. “That energy is contagious, and we really do feel that. And it just makes you happy.”

Balls strives to make the school a place where every student feels loved and welcomed. Whether in the office or the hallways, she tries to greet every student with a smile and talk to anyone who looks like they need a pick me up. “I always try to make sure that no matter who you are, what you're involved in, or if you're not involved in anything, the kids know that the office is a safe place for you,” Balls said. “I want them to know that school can be a fun place to be and people care that they’re here.” 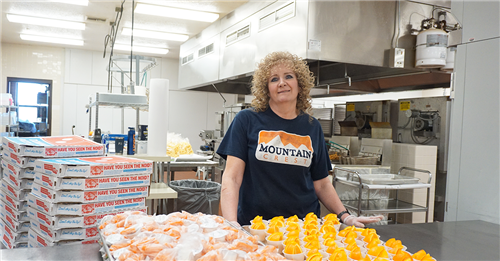 Julene Olsen does more than just serve lunch in the Mountain Crest cafeteria. For the last 20 years, Olsen has been instrumental in making sure that students are not only served nutritious meals but that the cafeteria is a fun, welcoming environment. One of Olsen’s favorite things to look for is a new joke on the milk cartons. Once she finds it, she shares it with the lunchroom crew and students.

“She is the most honest and hard worker you will ever find,” Christ Leetham, Mountain Crest’s Child Nutrition Manager, observed. “You can tell she loves what she does, she loves the kids as her own, and they love her.” Many of Olsen’s coworkers have nicknamed Olsen “Sunshine” because she brings a ray of sunshine to work every day. 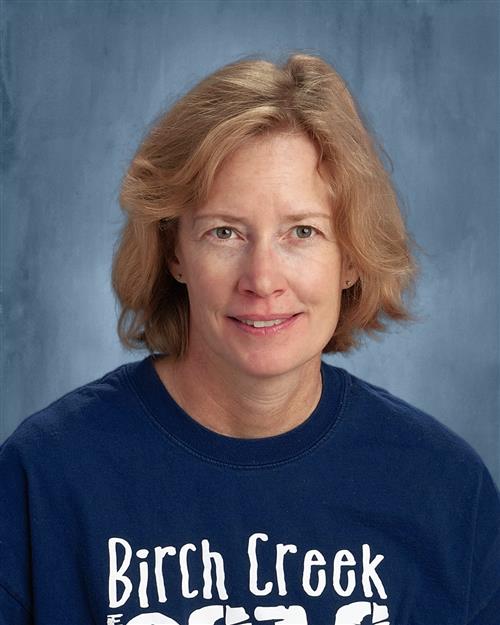 Dorinda May- Head Custodian of the Year

Dorinda May thrives in a beautiful environment. That is one of the many reasons she loves her job as Head Custodian at Birch Creek Elementary. May says that the “clean gene” runs in her family and the delight she feels by being in a nice clean environment is something that she wants to share with everyone at the school. “I have met some wonderful people who have worked with our custodial crew and some wonderful people who work here at the school!” May expressed. “I absolutely love the staff and the kids at this school!”

When May is not busy making the inside of Birch Creek beautiful, she can be found outside enjoying the sun and the stray kittens that find their way on to school grounds. May has set up a little cat nursery to help feed and give shelter to the kittens until she can find their home or adopt them out. Principal Trudy Wilson says that May treats every student with kindness and respect. “Dorinda is one of the most humble people I’ve ever met or had the opportunity to work with,” Wilson observed.