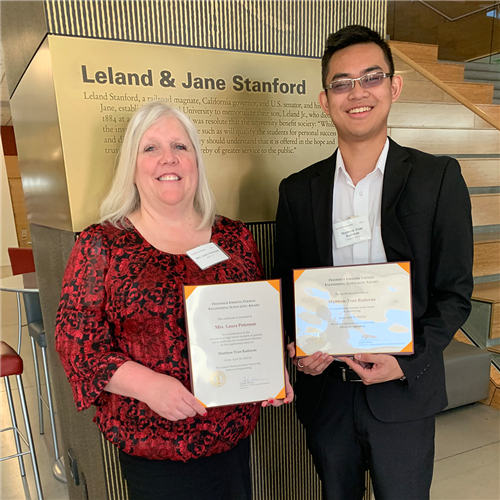 Do you remember the high school teacher who most impacted your academic career? Matthew Tran Radovan, a graduate of Ridgeline High School and a current student at Stanford University, definitely does. As a recipient of the prestigious Frederick E. Terman Award for Scholastic Achievement in Engineering, Radovan was given the opportunity to honor the most influential teacher from his secondary school days. He chose Ridgeline AP Calculus and Statistics teacher, Laura Peterson. As part of the recognition, Peterson was flown to Stanford University in California to be acknowledged during a special award luncheon on April 30, 2022.

Radovan chose Peterson as a most influential teacher because of her impact during his first year of high school. “Even as a freshman taking AP with upperclassmen, Mrs. Peterson made me feel comfortable and involved in her classes,” Radovan explained. “She understood the needs of diverse students in her classes and their educational goals and helped and prepared me to get a 5 in both AP classes.”

During his time at Ridgeline, Peterson taught Radovan the importance of mapping out detailed steps to help trace through and communicate his thought process when solving math problems. Radovan says that this process of being able to articulate his thought process and write it out step-by-step has been crucial to his computer science education. He still uses the skills Peterson taught him when designing or debugging software.

Peterson has been teaching in the Cache County School District for 32 years and has been at Ridgeline High School since it opened in 2016. She primarily teaches juniors and seniors in her AP Calculus and AP Statistics courses. Radovan had Peterson twice, first for AP Calculus and then for AP Statistics. Peterson also taught his younger sister, Caitlin, who is currently a junior at Ridgeline.

The Frederick E. Terman Award for Scholastic Achievement in Engineering is rewarded to the top 30 engineering students at Stanford University who have an outstanding academic record. Recipients of this award had the opportunity to invite both an influential secondary teacher and a professor at Stanford to be recognized as extraordinary educators. Radovan is currently getting his bachelor’s degree in computer science with a focus on artificial intelligence for neuroimaging. He will be interning this summer at Zillow as a machine learning engineer and will complete his master’s degree next year.

Congratulations to both Laura Peterson and Matthew Tran Radovan for this outstanding honor!