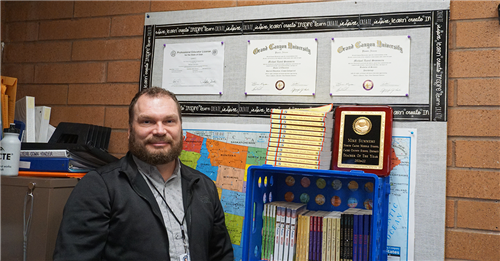 North Cache Middle School’s Teacher of the Year, Mike Summers, loves school so much he wishes he could have studied every major at USU. In fact, if he could, he would be a professional student for the rest of his life! This passion for learning is what motivated him to become a teacher.

Summers, who was born and raised in Cache Valley, has taught special education and Language Arts at North Cache Middle School for seven years. Because Summers remembers his own middle school years as some of the most challenging years of his adolescence, he strives to become the middle school teacher he would have wanted to have. His goal is to ensure that students have at least one person who will give them the support they need. “I’ve always wanted kids to know that they have someone who is absolutely fighting for them,” Summers explained. “That is super important to me.”

Because he enjoys working one-on-one with students who struggle and being a champion for them academically and socially, Summers feels drawn to special education. He focuses daily on meeting the current needs of his students. Although he has always had a lot of compassion towards others, his empathy grows every year as he better understands the challenges his students face.

Kelly Allen, a colleague at North Cache, has worked alongside Summers for three years. She describes him as energetic in his teaching style, genuine,  a teacher of high expectations, and welcoming of new learning opportunities. “Mike can handle the most challenging kids with ease and is a champion for the underdog,” Allen said. “He has taught me more about teaching and connecting with students than I have ever learned from any class or formal institution."

Summers believes that teachers have the most essential customer service job in the world. The customers are the students and the services are everything a teacher does. “The product you provide is possibly one of the most important services that can be rendered in the entire free world,” Summer explained. “We are offering the most important service to children—which is literacy. If you look at it from that frame, literacy is what gives us freedom and gives them the opportunity to be successful, to protect themselves, and to communicate.”

Mike Summers (with North Cache principal John Anderson and board member
Kathy Christiansen) was honored at the February 17th board meeting.