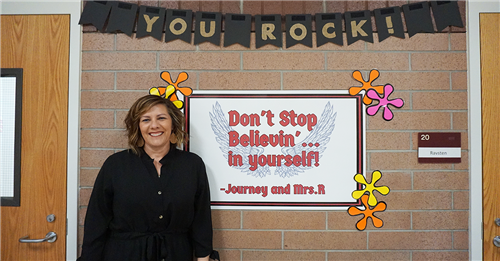 Congratulations to Jamie Ravsten, White Pine Elementary’s Teacher of the Year! Ravsten teaches special education resource classes with students from kindergarten through third grade and is in her third year at White Pine. A huge Journey fan, Ravsten has brought her love of rock into her classroom to help teach students to always believe in themselves. Every student has a binder that reads “Don’t Stop Believing in Yourself,” to remind them that they can do anything as long as they don’t stop believing.

Ravsten comes from a family of educators but planned to become a lawyer--until she took a special education class at Utah State University and discovered her passion for teaching. Ravsten loves the behavioral aspect of working with her students. She enjoys being able to help them manage their behavior and learn in the process. 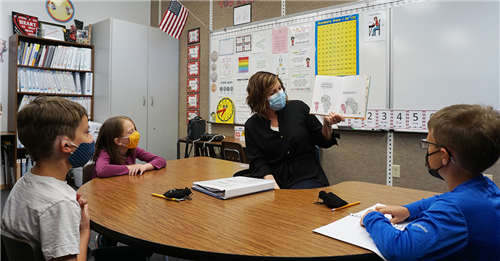 At the beginning and end of each school year, Ravsten reads a book where the main character Piggie throws a ball and it lands behind him. He believes he threw it around the world. His friend Gerald, the elephant, gets upset because Piggie didn’t actually throw it that far, but Piggie doesn’t care because he had fun. In Ravsten’s class, the students get to practice throwing a hacky sack Piggie’s way and Gerald’s way, to have fun.“You don’t have to be the best, but you have to be your best and have fun while you’re learning,” Ravsten explained.

Ravsten makes it a priority to ensure that every student's needs are met and that each child is given the best educational experience possible. “A child is never stuck in a certain place just because they have a certain disability,” Ravsten observed. “We can do anything. We just have to keep trying.”

Ravsten is known to go the extra mile to help her students succeed, in spite of some of their unique challenges. White Pine Elementary’s principal, Shellie Healy, describes Ravsten as cheerful, energetic, and unfailingly patient. Healy describes Ravsten’s classroom as an exciting place where learning is fun. “She is a truly dedicated professional who loves challenges,” Healy explained. “The more challenging the child’s needs, the happier Jamie is!”