Green Canyon High School band director Randall Beach has been creating stellar band programs for over 30 years. Beach has a way of inspiring his students to reach their potential, and in the words of Green Canyon Principal Dave Swensen, “watching him conduct a practice is like watching a masterpiece unfold.” We are proud to announce that Beach is the 2020-21 Cache County School District Teacher of the Year.

Randall Beach has always loved music, but as a child, he had a hard time picking just one instrument to play. Because of this, he learned to play the piano, alto saxophone, trumpet, drums, and other percussion instruments at an early age. He worked in Mountain Crest High School’s band program while he studied at Utah State University. Once he graduated, he began his first year of teaching in 1990. After briefly teaching band in Arizona, he moved to Utah County where he worked with BYU and high school bands for over 18 years. After earning his master’s degree in percussion performance from BYU, Beach returned to Cache County and became the band director at Sky View High School in 2009. He taught there until he transferred to Green Canyon High School when it opened in 2017. Over his career, Beach has led bands from these schools to many division, regional, and state titles.

As a teacher, Beach is known for having a gift to motivate students while still being aware of their unique needs. “He has an incredible gift in communicating, inspiring, and motivating,” explained fellow Green Canyon teacher and color guard coach, Katy Anderson. “It's an honor to observe him during band practice each day.” Anderson started working with Beach when she was still a university student and this is their eighth season working together. She continued, “He constantly tries to grow and improve. Even though he's easily one of the best band directors in the state, he isn't satisfied. He works to improve and create the best possible program and atmosphere for his students, and they turn into incredible musicians and people under his tutelage.”

Other colleagues at the high school are equally impressed with Beach’s efforts and dedication to his students. Green Canyon secretaries Wendy Balls and Amy Goodsell appreciate the enthusiasm and excitement Beach has brought to the school since the day it opened. “He has a gift of keeping the focus of his students and molding them into great musicians and students,” Balls said. She and Goodsell described how every summer Beach is outside with his marching band students during rehearsals. No matter how hot or long they may be, he is out there with them. “He is simply amazing,” they declared.

Green Canyon teacher and wrestling coach, Ryan Webb, believes that Beach is the epitome of a true leader. “In band, there are so many components that have to come together. The reality is that one person can’t do it all,” Webb explained. “What Randall has been able to do is establish a vision and organize a group of leaders (both youth and adult) who ‘march’ toward that vision with equal parts unity and loyalty. The kids and adults with whom he works are fiercely loyal and work hard for him; for the vision.” Webb concluded, “That’s a leader in my eyes.” 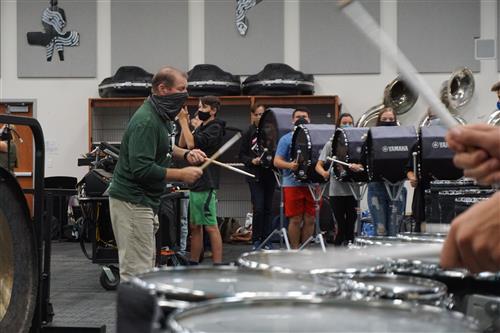 Not only is Beach beloved by his colleagues, but his students also adore him. Annalee, a junior at Green Canyon, said, “Mr. Beach is the best teacher ever! He helps all of us so much and he cares a lot about us.” Her classmate, Bethany, agreed. “Mr. Beach is the best teacher I have ever had in my entire life,” she said. “All the stuff that he says motivates me to do my best--no matter if I am doing band, or something else. He is not a run-of-the-mill kind of coach either; he doesn’t say empty words. He means everything he says.”

Perhaps Beach’s greatest strength is his ability to encourage and influence students to pursue greatness. “Mr. Beach is a really big inspiration for me,” explained Isaac, a junior in the Green Canyon band. “He really helps motivate us to achieve our best and work to achieve that level of perfection that he knows we can make. I am really appreciative of him for that.”

Beach said that he has high expectations of his students because he knows they are capable of achieving excellence. “High school kids are capable of way more than we often ask or expect of them,” he said. “If we keep raising the standards higher and higher and give them the resources and the instruction that they need in order to get there, they’ll always rise to the occasion. There is nothing more fun than being really, really good at something. If you’re going to do something, do it all the way.”

Beach was honored as the CCSD 2020-21 District Teacher of the Year during the September 17th board meeting. He was also awarded a free year-long car lease from Murdock Auto Group during a Green Canyon football game on October 2nd. “We want to thank all of the Cache County School District teachers and administrators for their tireless, and often underappreciated, dedication to the youth of Cache Valley, and recognize Randall Beach as the Cache County School District Teacher of the Year,” a spokesman for Murdock Auto Group said.