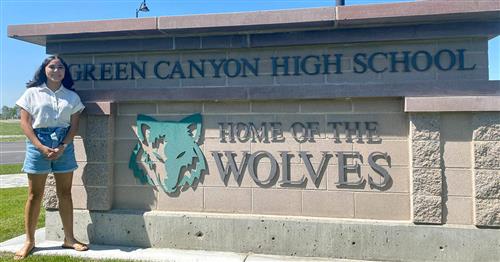 Throughout her life, Natalia Lopez has found a passion for learning, equality in education, and creating documentaries. Combining these passions, Lopez, a sophomore at Green Canyon High School, received national recognition for her most recent documentary “Mendez v. Westminster: Breaking Barriers.”

“It's really putting across an art through pictures and words. Documentaries are a really cool way to help educate others because you can show and tell them about the past at the same time,” Lopez said. She hopes her documentaries will help others to understand the struggles faced by those who fought for equality.

Lopez’s documentary was selected for the 2020 Digital Documentary Showcase hosted by the National Museum of African American History and Culture in Washington DC. Her work showcased the court case Mendez v. Westminster, in which Sylvia Mendez’s family brought a suit in the state of California against the segregation of Latina children in California schools. Ultimately, a ruling was made by the 9th Circuit Court of Appeals that this segregation violated the Fourteenth Amendment. This same ruling was reached years later by the Supreme Court in the landmark Brown v. Board of Education case.

Inspired by the children’s book “Separate is Never Equal” by Duncan Tonatiuh, Lopez jumped at the opportunity to create a documentary focused on Sylvia Mendez and her family’s fight against school segregation. Mendez visited Utah State University last fall, which gave Lopez the opportunity to meet her and interview her in person for the documentary--an opportunity that Lopez said was inspiring.


Gordon Peer, a teacher at Green Canyon, had the opportunity to be Lopez’s advisor for both Utah's History Day and the National History Day competition as well as her debate advisor. He said that she regularly outcompeted the seniors even as a freshman and that her work “bloomed beautifully” throughout the school year.


“I am a strong believer in creating spaces for marginalized voices to speak out and Natalia was able to be an advocate for a minority group that is regularly overlooked. Natalia was a pioneer at Green Canyon to push for History Day as a high school student and I hope others can follow her example,” Peer said. “She deserves all of the credit in the world for being opportunistic and caring.”

Lopez said the most enjoyable part of working on this project and any documentary is having the opportunity to learn about and help educate others on such important issues.


“A lot of people forget or don't seem to understand that it takes a lot to get to where we are now. Bringing forth that history and showing them that this is what happened — these are real people that were fighting for something — really brings across an important point,” Lopez said. “Learning about the past is the best way to begin fighting for a better future.”


Lopez’s documentary can be viewed on her personal YouTube channel. Congratulations to Natalia for her accomplishments and her great talent in creating documentaries!
Disclaimer Text
Disclaimer Text
Copyright © 2002-2020 Blackboard, Inc. All rights reserved.