From the time she performed in her third-grade talent show, Green Canyon student Kenadi Dodds knew that singing and performing on stage were going to play a big role in her life. Six years later, the stages she performs on keep getting bigger and better, with the most recent being the stage of America’s Got Talent.

The episode containing Kenadi’s audition was aired on Tuesday, June 30. She performed one of her original songs titled “One Way Ticket to Tennessee” for the four celebrity judges. Each judge gave high praise before giving their approval for her to move on in the competition. She has wanted to perform for Simon Cowell since she first watched American Idol at 4-years-old and was thrilled to not only sing in front of him but hear his praise and know that her performance made him smile.

Music has been a part of Kenadi’s life since before she can even remember as her parents have told her she would sing along to songs as a small child. She later started playing the piano, the guitar and eventually started performing all over the state of Utah. Kenadi has performed at many Aggie basketball games, Jazz games, the Days of 47 Rodeo, opened for a Swon Brothers concert and countless other venues. Kenadi was inspired to try out for America’s Got Talent because of her family, specifically her little sister Alexis. “She told me she wanted to see me on the biggest stage before her eyesight was all gone,” Dodds said.

The Dodds family has an eye disease called Retinitis Pigmentosa, which gradually causes loss of vision. Kenadi is the only one in her family who doesn’t have RP. Being able to perform on that stage and fulfill her little sister’s dream is an experience Kenadi will always be grateful for.

Although her talent has helped propel her forward, it has taken a lot of hard work for Kenadi to fulfill this goal. She has auditioned for shows like America’s Got Talent and The Voice in the past, but hasn’t quite made the cut to make it on the televised portion of the show. However, she never let these setbacks discourage her.

“I’ve learned to not let someone saying ‘no’ keep me from working hard at it and never giving up,” Kenadi said. “You just pick yourself up and keep trying. Just do your best and see what you can do to fix it so that you can come back prepared.” 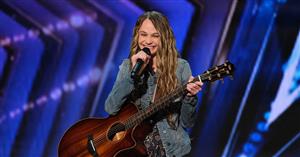 This hard work extends into Kenadi’s academic life as well as her personal practice. Kenadi was a part of Green Canyon’s Aurora Advanced Women's group choir during her freshman year at the school. Instructor Karen Teuscher said that Kenadi was so friendly and willing to learn things even outside of her comfort zone.

“She is humble, always seeking out extra help and growth, and enjoys contributing to the group as well as working hard to shine on her own,” Teuscher said. “I think Kenadi has tons of potential to go on and make music a future career — she has a pretty clear vision of what her goals are, and she puts in the time to make it happen, so I think the sky is the limit for her.”

To view Dodd’s performance on the America’s Got Talent stage, visit this YouTube link. Congratulations, Kenadi, on your accomplishments and good luck as the competition continues!