Assisting students in reaching their goals — in and out of the pool: Sky View Swim Coach, Marcus Singleton 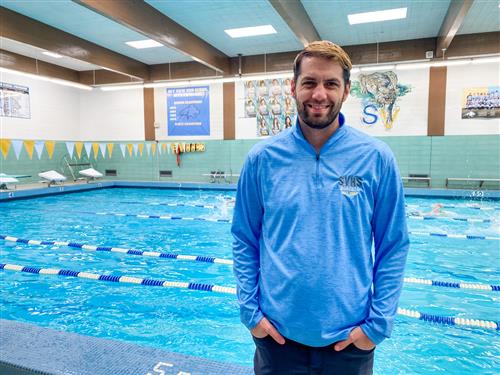 Going with a friend to swim tryouts in high school was not something that a teenage Marcus Singleton thought would change his life — but over the past two decades, it’s proven to do exactly that. Singleton has been coaching swimmers in Cache County for many years and has been a coach for Sky View High School for five years. His time and dedication to his athletes paid off this year as he was named the 4A Girls Swimming Coach of the Year by the Utah Swimming Coaches Association.

This award comes on top of the two state runner-up titles Singleton helped the boys and girls swim teams to achieve this year. KT Wallace, a senior, has been one of Singleton’s athletes for the last five years. She has loved being coached by him because of how much he cares for his students. “He doesn’t just care about me as a swimmer," Wallace explained, "but also as a person outside of pool which makes me work harder for him. I will definitely miss having a coach that pushes me and knows my potential."

Singleton’s coaching career started early, when he began helping his high school swim coach as an assistant coach to the club team. He has continued developing his coaching skills and love for the sport throughout his lifetime. Singleton loves the opportunity coaching gives him to help his students reach their goals. “Watching them succeed is what I enjoy the most by far,” he said. “They get that kind of light that goes on in their eyes as they understand something and are able to do it.”

Teaching students to reach their goals doesn’t end when they get out of the pool. Wallace said that she will also miss having the chance to learn life lessons from Singleton. She explained, “He has taught me to move on with a positive attitude even when things don’t go according to plans.”

Thank you, Coach Singleton, for all that you do to help students at Sky View achieve their goals!