Making a difference in our District: Deputy Superintendent Mike Liechty 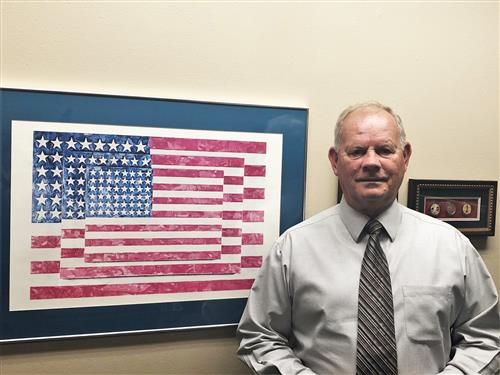 Mike Liechty is an educator who believes in the value of the Golden Rule. For him, “the bottom line is how you treat people.” After over 35 years with Cache County School District, Liechty has had plenty of opportunities to put this philosophy into practice. From a middle school math teacher to CCSD’s Deputy Superintendent, he has touched the lives of countless teachers, administrators, and students.

After graduating high school, Liechty joined the Utah National Guard. He served for 41 years, spending the last five years as a general before retiring in 2013. During this time, Liechty was inspired by his father-in-law to become an educator, so in 1983, he began his journey with Cache County Schools. His career in education started at South Cache Middle School, where he taught algebra, pre-algebra, and geometry. He completed his graduate work at Utah State University while teaching, which prepared him to advance into administration.

In 1988, Liechty became the assistant principal of Spring Creek Middle School. Four years later, he moved to the South Cache Freshmen Center, where he served as principal and assisted in the opening of two other new Freshmen Centers. After three years at South Cache, Liechty became the principal of North Cache High School. He worked there for a few years before accepting a position as the Career and Technical Education (CTE) Director for the District Office. In 2011, he was also selected to be the District’s Deputy Superintendent, which position he still holds today.

Liechty believes that much of the District’s appeal is the personalization that occurs within its schools. He learned to appreciate an individualized approach to education from a young age. “My memories do not revolve around what I was taught, but rather, how I was treated as a student. My sixth-grade teacher was all about working with each student to make sure they understood what was going on. In middle school, I got involved in sports and grew closer to the students there, and in high school, I developed good relationships with teachers, coaches, and administrators.”

A Cache Valley alumnus, Liechty understands the appeal of our Valley and why it continues to grow. “Whenever we have openings in the district, we have a lot of people who apply who are outside of this Valley. People always want to come back. Cache Valley is growing, but it’s still small enough that we have a sense of community. It’s a nice place to be.”

Liechty has spent his life serving our country and serving the district. His hard work and dedication have changed the Valley for the better. “I hope that people will remember me as someone who is always straightforward and honest, and who treats people fairly. Superintendent Norton and I were pretty aggressive in some bond projects that we recently completed. Who would have thought that we would have built two new high schools in our district? But, we did it! That’s a big mark. Now, twice as many kids have a chance to participate in events and activities at a school. It took a lot of work and effort to do that.”