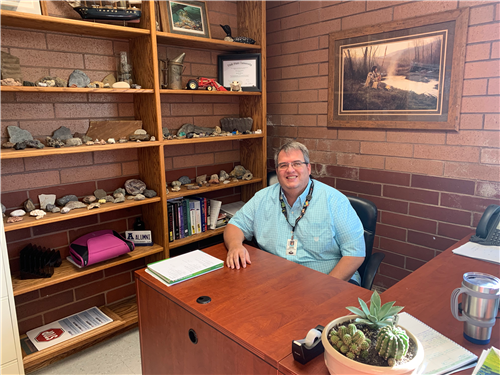 When you walk into Shawn Godfrey’s classroom at North Cache Middle School, the first thing you’ll see is shelves covered by his extensive rock collection. Next, you’ll notice that his classroom is full of excited students, busy at work building paper rocket models or cramming for a quiz. You would probably never guess that Godfrey started his career at North Cache as a janitor, cleaning the halls that he would soon walk as a teacher. His journey to the classroom was not an easy one, but it exemplifies the value of working hard as you pursue your dreams.

It was never Godfrey’s plan to become a teacher. “I had another life before, selling building products,” he admits. “When that fell through, I decided to go back to school.” While attending Utah State University, he discovered a passion for science, especially geology. “I chose geology because I really like to play with rocks, find rocks, pick up rocks… My house is full of rocks. My wife complains about my rocks,” Godfrey jokes. “She was glad I started teaching so I could bring the rocks here and open up shelf space at home.” While studying as a full-time student, Godfrey worked as a custodian at North Cache Middle School, where he quickly became part of the school family.

Ruth Mudrow, who taught French and German at North Cache while Godfrey was working as a janitor, was impressed by his enthusiasm and enjoyed talking to him while he cleaned her room. “I was very excited for Shawn when he started his studies at Utah State and decided to pursue a degree in geology,” Mudrow shared. “We talked about the courses and the field trips he had to make for some of his university courses. I could tell he was passionate about his field of study.”

When Godfrey finished his degree, Mudrow encouraged him to sign up to become a substitute teacher. “I figured the science teachers at North Cache would be happy to have a substitute who understood their curriculum,” Mudrow continued. “I also thought Shawn would do well with students, based on some of the stories he told me about bringing up his own kids.” According to Godfrey, Mudrow’s encouragement had a significant influence on his decision to become an educator.

Even though Godfrey started farming after he graduated in 2016, the classroom continued to call to him. With the help and encouragement of Mudrow and other faculty at North Cache, Godfrey returned to the middle school, this time as a substitute teacher. He worked in that capacity for two years until, through the support of faculty and administration, he began the 2019-20 school year as a full-time 8th-grade science teacher.

Godfrey is grateful for the warm school environment at North Cache Middle School. “All the teachers are really friendly,” he shared. “I had the support of the administration too. They included me like I was a teacher even though I wasn’t at that time. They were all in my court.”

Godfrey’s desire to learn comes from his desire to teach. “While I was at the University,” he said, “since I was an older student, a lot of the younger students that were in my group would come to me for advice. They always wanted help. So, I started thinking about teaching at that time because I liked to help the younger kids.” This eagerness to teach was what spurred Godfrey to go back to school. It also affects his plans for the future. “I like to learn, so I will always be taking classes. I want to always keep learning, and if you don’t do anything past what you originally had, you’re not going to grow from it.” He added, “You have to keep learning to help the kids learn.”