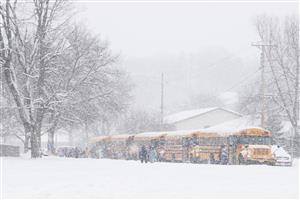 The decision by the Cache County School District (CCSD) to issue a Late Start, Early Out or Cancellation for its schools follows set procedures and guidelines. A team at the CCSD Transportation Department, which serves both Cache County and Logan School Districts, carefully monitors weather forecasts and current conditions, relying on information from the National Weather Service and other local entities responsible for road conditions. This team considers factors such as snow accumulations, temperature, visibility, winds, and road conditions, both before and during inclement weather. Based on their observations and communication with local officials, this team makes a recommendation to the Superintendent’s Office on whether there should be a Late Start, Early Out or Cancellation for district schools.

After taking all factors and recommendations into consideration, the Superintendent and other district officials make a final decision on any Late Start, Early Out, or Cancellation. First and foremost, this decision focuses on the safety and well-being of students and staff while traveling to and from school.

Once a decision is made on a school Late Start, Early Out or Cancellation, the Superintendent’s Office contacts the district’s Public Information Office (PIO), which communicates with parents and staff. The PIO utilizes an emergency alert system which sends phone, text, and email alerts to students, parents, and staff. Announcements are posted on the CCSD website, as well as the district’s official Facebook page.  Media outlets are also informed.

Cache County School District covers a large geographic area in which weather and road conditions may vary. Parents have the choice to make decisions based on local circumstances and conditions. The option to keep children home during severe weather conditions is always at their parent’s discretion, and school staff will respect that decision. Students who are kept home by a parent or guardian will not be penalized for their absence or tardiness.  Make-up work may be necessary, but school staff will accommodate students on timely completion of assignments or tests.

In a Late Start, morning bus stop and school start times are delayed by exactly 2 hours. Schools release at the usual hour. During a late start, morning kindergarten and preschool will likely be canceled.

In an Early Out, school release and bus stop times are 1 hour and 15 minutes early.

For a school Cancellation, there will be no school that day.

Schools will make decisions on their extracurricular activities, based on the safety of students and staff, after consulting with transportation.

Update your alert preferences on PowerSchool.